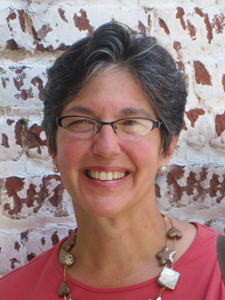 I’ve had the great pleasure of working with Sabina on several projects in recent years. She has a remarkably vast knowledge of the building process. This, coupled with her ability to interpret her clients needs and desires into workable plans, is what makes Sabina such a treasure.  If you are thinking about a major remodeling project or if you are ready to design your dream home, I would urge you to contact Sabina. She will make the process easy and enjoyable, as well as save you time and money. 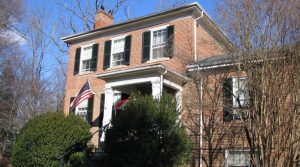 Braehead, c.1859, a project I worked on with Sabina. More on this very special project to come. 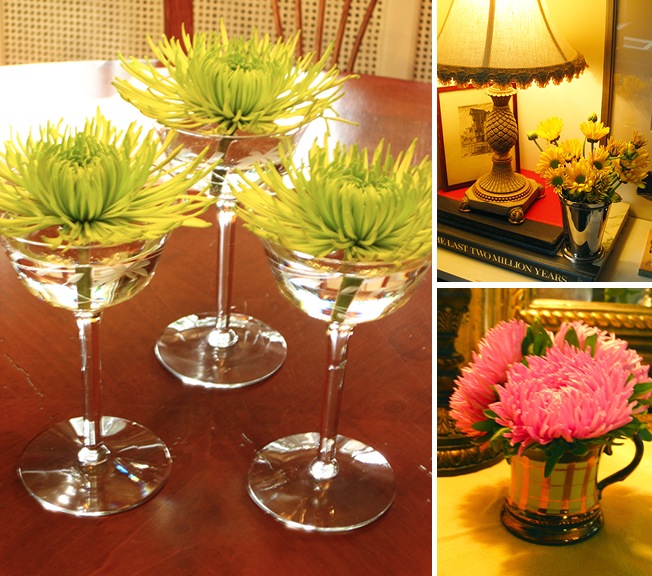 Understated and elegant, these arrangements incorporate flowers, of course, but also fruits, nuts and even onions!

The secret is to keep it simple. Use one kind of flower and no arranging is necessary. And break the rules! Who says you can’t put enormous flowers in a teacup or a champagne glass? 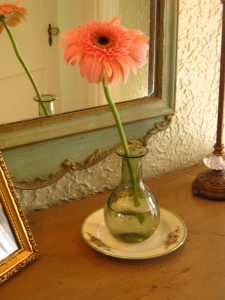 Even a single blossom can be beautiful.

Fresh Anjou pears and a handful of mixed nuts look so beautiful, you may not want to eat them! The wooden vessels in these photos were handmade by Glendon Boyd of Floyd, Va.

A vintage bowl with onions, shallots and garlic bring simple beauty to a kitchen counter.

Orchids used to be considered so exotic and rare. Now, you can’t go to the hardware or grocery store without being bombarded with thousands of these beauties begging for you to take them home. After the flowers fade, however, the plants are not so lovely and many of them are tragically thrown away. Have you done this? Do you feel guilty? 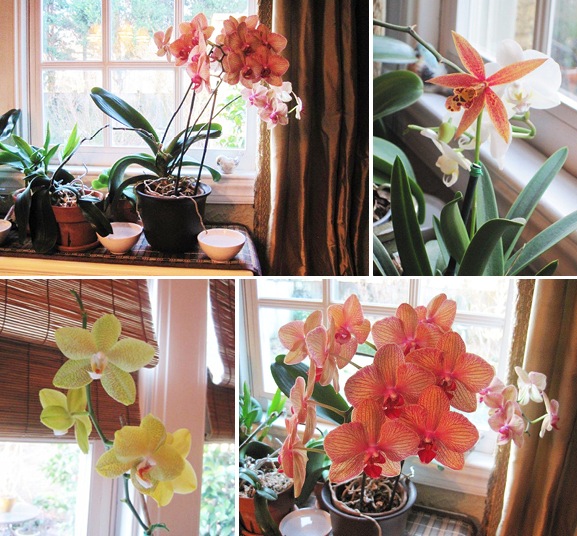 I’ve been growing orchids for over 15 years, and let me tell you, when you get one to re-bloom for you, it’s a special feeling – well worth the few weeks of waiting. There is no secret method (forget the ice cubes). In fact, I do a lot of things that the complicated “How To Grow Orchids” books warn against, and I think the pictures are proof that my orchids are happy.

So here is my method: I have 12 orchids of various types, sitting in front of a south facing window on top of a radiator. Yes, a radiator that gets hot in the winter, in front of a drafty window that gets intense sunlight. I know…the orchid police are on their way! I usually leave the orchid in the pot in which I received it, sometimes placing it inside a more decorative planter. The exception is if the orchid’s roots are rotting. In which case, I remove it from the pot, clip off the rotted roots and re-pot it in a clean pot.

Once a week, I take each plant to the kitchen sink and give it a shower, totally soaking the whole thing (not the flowers) with cool, not cold water. In the winter when the radiator is heating, I also place rice bowls filled with water all around the plants to increase humidity. I also water the plants a bit more if the radiators are really pumping. If a plant is not flowering, it gets a drink of Miracle Grow at its weekly watering to encourage flowers. If it’s blooming or budding, I hold off on the plant food. That’s it!

Roots gone wild! Orchid roots can be fascinating, too. This one looks like it’s trying to escape! Look at the lower left of the plant in the close-up, near the base of the plant. See the little green shoot? That will be a stalk of flowers in a few weeks. The silver shoots with green tips are new roots.

The color gurus at Pantone have decided that Tangerine Tango, a vibrant reddish orange is the color of the year. Do you agree?

Many of my clients are ahead of the curve on this one. We’ve been using orange, rust and terra cotta for quite a while. It’s a warm color family that works for a lot of people and, surprisingly, with a lot of other colors. It’s especially nice paired with a warm taupe or khaki.

Another newer color I am drawn to lately is a yellowy green…somewhere between chartreuse and lemongrass. It’s fabulous with pale beige, grey and black, and looks incredible next to an intense teal. With any of these trendy colors, go for small doses, and stick with easily changeable paint or accessories. A little goes a long way.

What are the colors you are craving right now and how do you want to use them?

This is one of those soups that’s best if it simmers all day. Using canned beans will shorten the cooking time, but the flavor and texture is not as good. Feel free to substitute ham for the chicken. Spice it up with some andouille sausage or chipotle. Get creative! That’s the beauty of soup!

Rinse dry beans well. Put in soup pot with 3 c. stock. Bring to a boil, then cover, reduce heat to low and cook, stirring occasionally, for 90 min. Beans should be tender and almost done. Skim foam from the surface and discard. Add chicken, veggies, herbs (except cilantro) and spices. Add about 2 more cups of stock OR water. Bring to a boil, cover and reduce heat to low. Cook at least 30 – 45 min., stirring occasionally. Soup is ready to serve, but the flavor gets richer if soup is allowed to cool and then is reheated for serving. Add salt and pepper, if desired. Ladle into bowls and top with grated cheese and cilantro. Enjoy with jalapeno cornbread, cheesy biscuits or tortilla chips.
Makes about 4 generous servings.